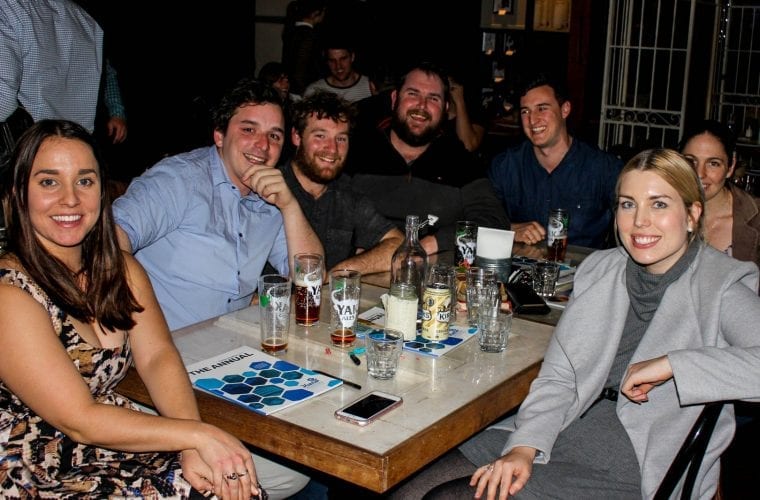 I’m Kian West, Director of Hunter Young Professionals, and I was lucky enough to host our 2017 Trivia Night and now provide you this recap for those who missed it.

A line spilling out along King Street waiting to enter Central for our Trivia night really set the tone for our sellout event. Groups gathered and connected as the room filled. You could almost smell the excitement.

A brilliant introduction from Akshay and I (even if I do say so myself) kicked off the activities as attendees found their seats and browsed through their free copies of the Hunter Headline Annual. Colour coded toy soldiers helped the staff at Central Bar match burgers to their owners – such a clever idea – as people tucked in.

Josh and Liam Hewitt kicked Trivia into a different direction from your usual pub trivia with a sense of theatrics unlike we were used to. Four intense rounds of questions ranging from “who said this?” to “what movie poster is this MS Paint drawing meant to be?” Seriously, there was a round that included a hairy caterpillar that looked like Donald Trump! I really don’t know how to explain the trivia to anyone that didn’t attend other than to say it had lots of theatrics involved.

Big thanks to our Trivia round sponsors:

People may have taken a while to warm up to a trivia like no other, but the crowd seemed to enjoy a night that was different and there was certainly an air of competition in the room.

Better Late Than Pregnant were the overall winners, but the true victory of the night was from everyone that had a great time! Already working on our thinking caps for next year…