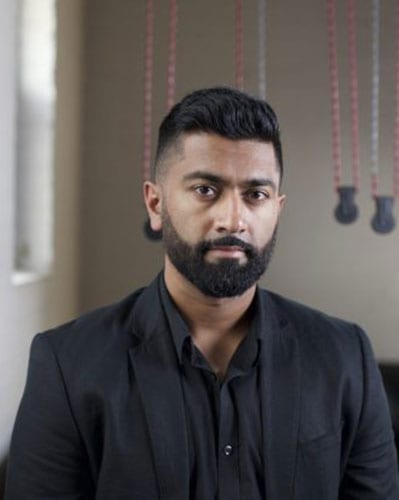 Thanks for chatting with us Hamza. Can you tell us a little about how you landed into the marketing industry?

As a child, I had a starstruck fascination with music videos. This obsession inspired me, as a teenager, to pursue videography as a hobby. Armed with nothing but the family camcorder, a handful of memory cards, and the earliest editions of Windows Movie Maker, my friends and I would painstakingly produce new takes on our favourite pop, rock, and hip-hop music videos from the early 2000s. Mind you, all of this was taking place at the dawn of the internet as we now know it, back when Facebook still had a masthead, and Google Video was warring with a small upstart called YouTube.

Now, to promote our work, I had to teach myself an array of complementary multimedia skills, including (but not limited to) photography, graphic design, and web design. What I was too green to realize at the time was that this growing repertoire of skills fused with a natural hustle to reach and engage audiences resulted in the ideal aptitude for a career in marketing. Flash forward to my undergraduate studies, where I stumbled into a marketing case competition sponsored by none other than music industry behemoth, Sony Music Entertainment. The final project, a case competition, involved the creation of a marketing campaign for an up-and-coming music artist. In hindsight, I had been preparing for this opportunity for my entire life. As fate would have it, my team won the competition, and I was subsequently offered an internship at the label.

My luck compounded, as I joined the company during a significant inflection point: digital innovation was disrupting the music industry (and by extension, the media industry). As such, the label was forced to reinvent itself as a 360-degree marketing agency. My 12-month internship at Sony Music Entertainment was the definitive ingress point in the industry. It served as a crash course in marketing, innovation, and leadership through periods of immense change. The rest, as they say, was history.

You’re a two times TEDx speaker, you wrote the best-selling Amazon book; The Burnout Gamble, plus you host the podcast; Ideas into Action as well, I’m sure of numerous other projects. How do you manage to juggle it all?

For as long as I can remember, I’ve resisted the idea that you can only be “one thing.” What a travesty it would be to die with your proverbial music still inside of you! I prefer, instead, to be multifarious. We often think about how limited our time is. When, in fact, the reality is that we have a lot of time. 168-hours a week is more than enough time to make incremental progress towards whatever goals we have.

However, I also understand that juggling numerous projects comes at a steep price: relentless discipline. It first began as an exercise to trick my natural tendency for procrastination, but later became my modus operandi: I treat my time, energy, and attention with the same rigor that one might treat a financial portfolio. Consider for a moment why you might create a financial budget. It is because you value your money, and you want to articulate and manage your priorities. Now consider that your time is invaluable and that your calendar and to-do list (both budgets of sorts) are the most accurate reflections of your priorities.

To juggle the multiple components of my work/life portfolio, I carefully manage my time, energy, and attention. Inspired by Tim Ferris’ The Four Hour Work Week, I’ve spent years practicing “lifestyle design.” You can’t “make time” per se, but you can undoubtedly allocate it. By viewing the 168-hours available to me each week as a canvas, I’m able to create time for the “non-negotiable” elements required for me to be productive towards the things that are important to me. It’s the small, consistent actions—often daily, “imperative” actions—that result in massive change.

What is your number one tip to stay on-top of, or beat stress?

Treat your sleep with the same care and consideration that you would your waking hours. As you would plan to have a good day, also plan to have a good sleep. As an example, make sure you’re reducing your liquid and blue light intake hours before going to sleep so that you’re not waking up in the middle of the night, let alone struggling to get shut eye in the first place.

Make sure you’re also creating sleep “rituals” such as reading or meditating before bed so that you can lull your body into sleep. And try to dissipate your anxieties about the next day by journaling and; our writing your 5x major to-dos for the next day. There’s both an art and a science to gaining a restful, replenishing sleep. Good sleep equals great days, and great days equal better sleep. It’s a virtuous cycle.

Is there something you wish someone had told you at the beginning of your career, that you’ve now learnt along the way?

At the beginning of my career, I wish I had learned the need to be kind to myself. I wish I had learned to treat myself as someone I’m responsible for helping. Earlier in my career, I gave into wholly unsustainable and unhealthy ways of working. I’m talking about long hours, high stress, broken sleep, adrenal fatigue, etc. that would lead me to experience burnout time and time and again. Back then, as an overachiever, I would be relentlessly harsh on myself, to the point of self-sabotage.

I used to believe, wholeheartedly, that I wasn’t “enough”—that I wasn’t perfect enough, efficient enough, progressive enough, satisfied enough, or innovative enough. This performance pressure, in hindsight, was counterproductive. It’s taken me some time to come to terms with the fact that there is a version of my story in which I could’ve extracted the same wisdom with substantially less pain. The juice wasn’t worth the squeeze.

I don’t assume that you’re a fortune teller, but if you were, where can you see digital marketing and social media in the future?

I often look at the gaming industry as a crystal ball. Consider that these companies need to place billion dollars 5+ year bets on the future when launching consoles. Over the years, with higher and higher definition, I’ve seen clear trends emerge in favour of the empowered and connected consumer, one who lives in a world of “caveat venditor” (i.e. “seller beware”); the future of marketing is simple, immediate, social, integrated, and personalized. Think of any of your favourite brand experiences—there’s a good chance that they’re leaning into one or more of these characteristics.

How did this collaboration with Hunter Young Professionals come about?

A theme in this interview that seems to have emerged is, “the person, the right message, the right time.”

In 2015, I delivered my first TEDx talk, a tirade of sorts against traditional management practices. The message was impactful then, but it’s significantly more impactful today as more of Gen Y and Gen Z find themselves entering the workplace, disillusioned. The talk has gone viral across the world, and it caught the attention of Professor James Hunt, who played the speech for his MBA class (where it was very well received.)

James graciously reached out to me with words of encouragement on LinkedIn. Luckily enough, I had plans to be in Australia in the coming months for another speaking engagement, and I suggested delivering a guest lecture to James’ class while there. He one-upped my offer by suggesting we transform my visit into a full-blown event for the University of Newcastle / Hunter Young Professionals community. And I was more than happy to oblige.

What can guests expect from your talk?

I’m looking forward to sharing my most recent meditations on the future of work; I’ve been wrestling with a handful of paradoxes, including this one: despite increased awareness of burnout and solutions for it in the workplace, levels of burnout have reached epidemic proportions around the world.

As a companion to that problem is the question of leadership in an age characterized by endless disruption; what will the world look like in 2030, when more than 70% of the workforce will be dramatically affected by technological change? What work will be left for us humans, post-automation? And how will we deal with the inevitable performance pressure and resulting stress caused by this great upheaval? Somewhere between these big questions is a set of new ideas that will gain life on stages across Australia. In the land down under, we can further unpack these problems and discover solutions to them.

This article was originally published on Hunter Hunter.